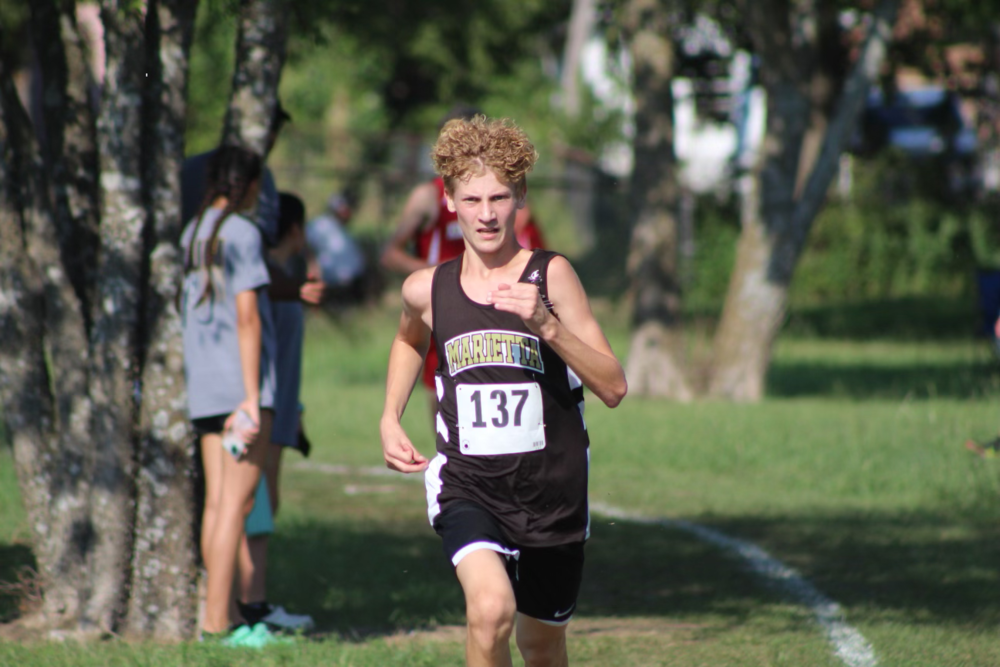 Marietta’s Lutkenhaus on a hot streak

Tripp Lutkenhaus, an eighth grader at Marietta Middle School, has competed in four cross country meets this year. Guess how many he’s won?

In the world of sports, that’s called a hot streak, and Lutkenhaus’s began in Purcell on August 23 at the Indians’ first meet of the season.

At the Purcell meet, Lutkenhaus competed against 77 runners in a one mile run that he won with a time of 5:43.55, more than three seconds ahead of the second-place runner.

“Because of the distance they run, in cross country it’s big to beat someone by several seconds,” Anderson said.

Cross country is, quite literally, a game of seconds, and at Purcell, Lutkenhaus began to amass a pile of the seconds by which he’s beating second-place runners.

After Purcell came the Red River Showdown in Marietta on August 27. Running with 69 others, Lutkenhaus finished first with a time of 11:43.42. This time, he extended his margin of victory, ahead of the second-place runner by five seconds. That day, in addition to his commanding individual performance, Lutkenhaus’s and his fellow runners commanded the trophy for winning the team championship.

Next came the Madill Cat Run on September 3. Among 95 runners in the two-mile run, Lutkenhaus again finished first with a time of 12:12.81, followed not-even-closely by the second-place runner with a time of 12:28.78.

And finally, Saturday, September 10, the Indians traveled back to Madill for the Lake Country Conference Cross Country Championship where Lutkenhaus won again. His time in the LCC meet was 11:53.70. A while later, the second-place runner crossed the finish line in 12:03.18.

“Tripp is a very, very competitive kid,” Anderson said. “When I ask him the day before or the day of a race, ‘Tripp, are you ready?’ there’s no hesitation and the answer is always yes. There’s no doubt that he goes into every race wanting to win and believing that he can win. And he runs like he owns that race.”

Lutkenhaus has been running since elementary school, and as a middle school runner is already a seasoned competitor. Anderson said that he’s becoming a more mature runner all the time, and is also a great student in the classroom, one who is respectful, teachable, and coachable.

Even with the jump in distance when he moves to high school cross country next year, Anderson believes he has the potential for great success as he continues his running career, due in large part to his work ethic and his ability to outsmart his opponents as well as outrunning them.

The next meet on the schedule for junior high cross country runners is September 20 at Byng. Fingers are crossed that Lutkenhaus extends his hot streak.