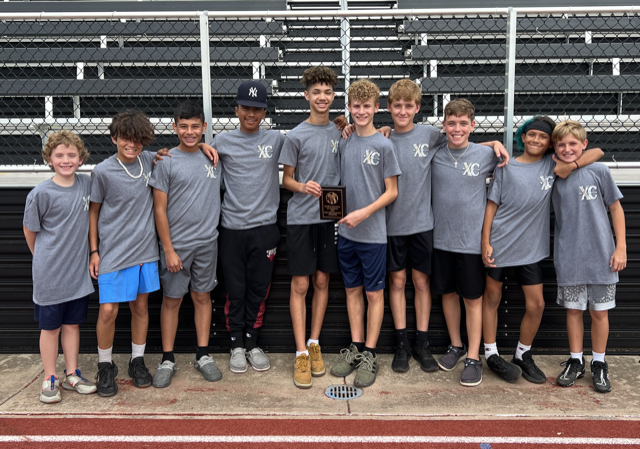 After the dust from the 8:30 shotgun start was settled, Marietta’s junior high boys team was in first place, while both the junior high and high school girls teams placed third and the high school boys team placed fifth.

“We did pretty well today,” said Coach Tanica Anderson. “Over the summer, our numbers weren’t where we wanted them to be, but we’ve added several kids since school started. They’re starting to buy in and see that they can actually run.”

Seventy runners competed in the junior high boys meet, with Marietta’s Tripp Lutkennaus finishing first with a time of 11:43.42. All of the Indians’ scoring runners finished in the top 16, with Eduardo Rueda in eighth place, Cash Dobbins in tenth, Mayer Mansfield in 13th, and Eli Holmes in 16th place.

The Indians’ team won the meet with 48 points, followed by Plainview in second place with 63 points and Madill in third place with 64 points.

The junior high girls team placed third in the 2400-meter race of 71 runners behind Plainview with 22 points and Madill with 57 points. The Lady Indians’ team had 78 points.

Leading the JH Lady Indians was Izabella Fernandez in eighth place with a time of 11:55.57. Also running in scoring positions were Kashlynn Weatherford in 11th place, Bailey Lane in 16th, Allison Aldaba in 21st, and Sidney Sawyer in 22nd place.

The Lady Indians high school team ran third in the 3200-meter race of 60 runners. Marietta had 71 points, behind Plainview in first with 34 points and Madill in second place with 56 points.

“We were pleased with Maddy’s performance on Saturday,” Anderson explained. “If she continues to work hard and improve, she could step up and be a team leader for us.”

“Luis is only a freshman, and he has a lot of potential,” said Anderson. “We hope he stays health and reaches it.”

Anderson said that her teams are working hard, and she is expecting improvement throughout the season. She also expressed gratitude for the all the help she received with the meet.

“We appreciate the Marietta Fire Department and Marietta First Christian Church for providing ice for drinks, Gary Presley and Bobby and Lisa Anderson for helping put the course together, the Growers Market for hosting a hospitality room and concession stand, and for providing all the runners with a healthy snack after the race, and Dollar Tree Warehouse for providing us with a large donation of water,” Anderson remarked.

“A meet like this takes a lot of volunteers, too many to name, and we are so grateful for their help. We couldn’t hold this meet without all of them.”

The cross country teams run next in the Madil Cat Run on Saturday, September 3.