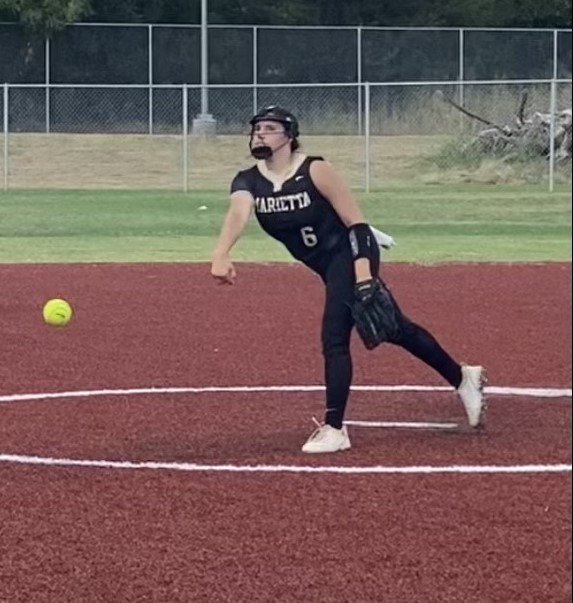 The Marietta Lady Indians fast pitch softball team hit the road headed west on Tuesday, August 16, traveling to face district foes, the Riverside (Anadarko) Indian School Lady Bruins, in a double header. When Marietta left Anadarko a few hours later, it was with two in the win column, a passel of RBIs, and one perfect game by pitcher Jaylynn Hartman.

Taryn Blankenship took the mound in the first game, throwing seven strikeouts in the 11-6 Marietta victory, their first of the season and first in district play.

With a little help from her friends – in both defense and offensive production – Hartman’s perfect game came in the second game of the double header. Hartman threw four strikeouts in the effort as the Lady Indians dominated their opponents, 12-0.

“We struggled some in the first game,” said Coach Kevin Parsons, “but fought through the adversity to get the win. Then we came out in game two and really played an exceptional game with a great pitching performance by Jaylynn and a great defensive effort to help her out.”

It was a stellar day for several Lady Indians offensively. In the two games, Hagen Hicks stole five bases and went 5-7 at the plate with four RBIs. Laney Hicks went 3-5 with six RBIs and an inside-the-park homerun. Graicee Hicks was 4-6 with five RBIs.

“I was very proud that the girls came away with two wins in a long road trip today,” Parsons said, “but even more proud of how hard they played.”