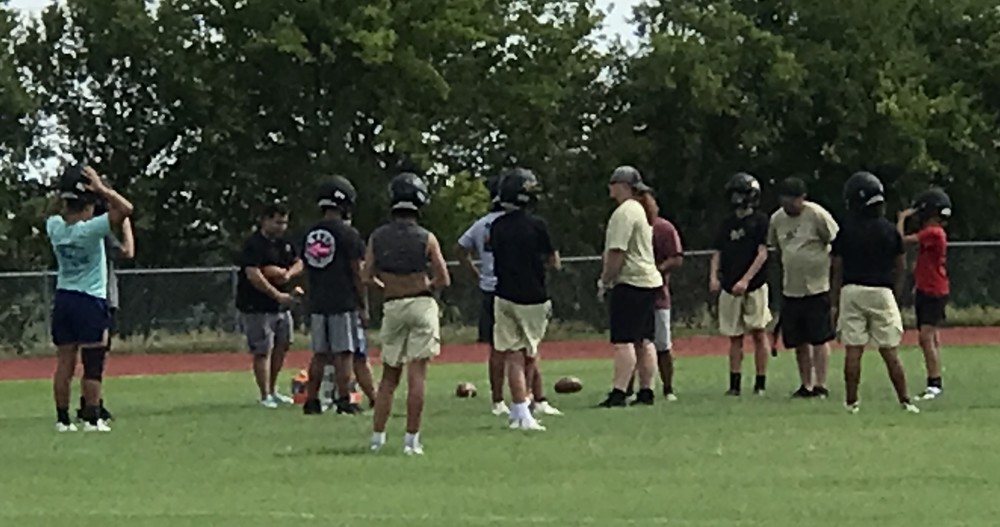 Since spring football ended, several dedicated Marietta Indians football players have spent their summer preparing for fall. After an August 19 scrimmage at Lone Grove, the Indians open their season on August 26 at home against Valliant with kickoff set for 7 p.m.

“After spring football ended, we had a three-team camp with Lone Grove and Dickson,” said Head Coach Alex Doby. “Lone Grove will be good, but we had a successful camp and really competed with them, and I think looked even better against Dickson.”

Players were allowed a week off before heading into summer workouts, which the majority of the team attended daily.

“Right now Aldo Salazar, Juan Lopez, Kaden Dudley, and Xavier Guerrero are going to be our standouts,” Doby stated, “and our most improved player since last season is Jared Kaminski.”

Dudley and Guerrero were able to attend a summer lineman camp at East Central University.

“They had a tremendous showing and may have the potential to go and play college football in the future,” Doby said, “so it was good to get them in front of college scouts.”

The team’s first official practice was held on Monday, August 8.

“During the summer we’ve been doing our workouts early so we’re done before it gets too hot,” explained Doby. “Monday, we switched to afternoon practices from 1 to 4, so it was pretty warm, but we have kids starting morning vo-tech and we can’t continue our morning practices.”

This year, Doby said that he’s looking for the team to take a step in the competitive direction.

“We’ve taken a lot of lumps in the last couple of years,” he said, “but these kids are going into the third year of the program, so they’re growing into it. Looking at our schedule, I believe we can win three-to-five games, and if we can win those, who knows—we could really get rolling.

“I think it depends on the commitment of a few boys. We have a core group of kids who are getting a sense of how things are supposed to be. That’s what it’s going to take to build this culture of accountability, and hopefully start having some success because of the work that core group has put in.”

“We’re really excited because the middle school team will get coaches that are 100 percent theirs,” said Doby. “We’re expecting that to lay the groundwork for us to build on and these kids deserve a staff that’s dedicated to them.”

Most successful high school football programs begin with skill building in the during the junior high years, something that many administrators, including Marietta’s recognize.

“I really like that Coach Doby gets that middle school is really where it’s at as far as developing kids and getting them hooked into a program,” said Superintendent Brandi Naylor.