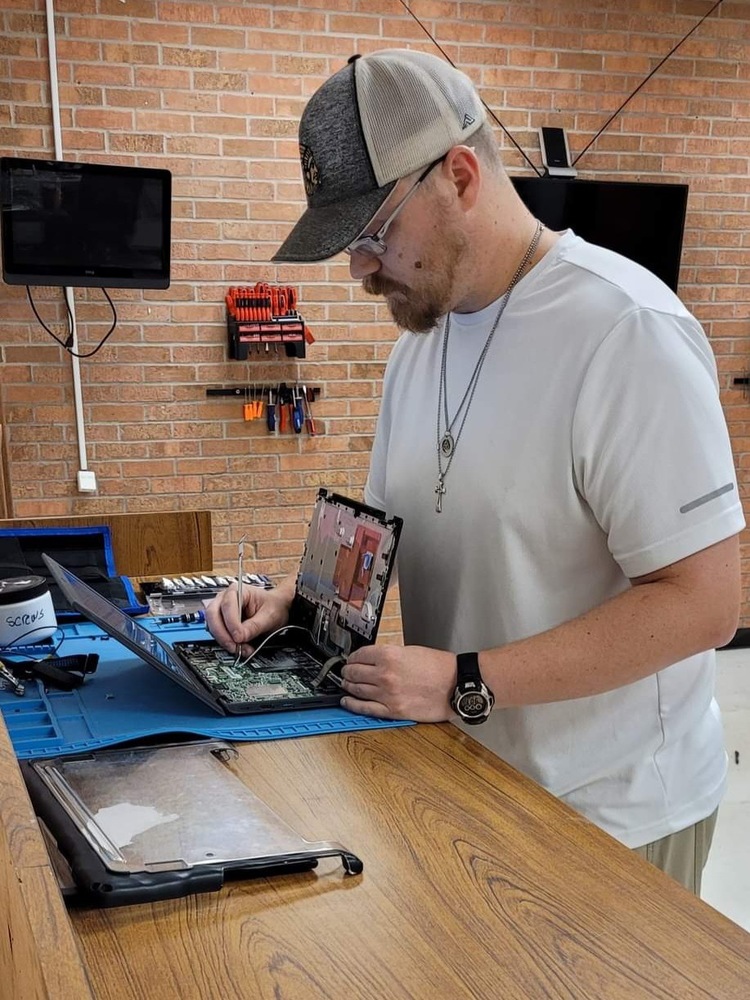 Marietta’s Technology Director Nate Jackson and Systems Analyst Josh Jones are a two-man department tasked with some heavy lifting. The duo keeps all technology within the district working at optimum levels.

That list of technology includes every office and teacher computer, network, lab and library computer, security and bus camera, intercom and telephone, hot spot, and even the Chromebooks used by students. All of it falls under the auspices of the technology department of two. And they do it with pride.

“We are careful with our technology spending,” said Jackson. “We do all we can to save the district money, because every dollar we don’t spend on technology can be spent in other places.”

The district has hundreds of desktop computers, but a particularly challenging part of their job is keeping the over-2,000 student Chromebooks working.

Every student from grades three through twelve takes home a Chromebook and there are classroom spares, also. That’s one for each student plus extras for when someone forgets to bring theirs from home, forgets to charge it, or worse yet, it isn’t working.

“That’s a lot of devices,” Jackson said, “and you can imagine the amount of brokenness that travels home and back with students every day. And if the Chromebook is damaged, then parents must pay to have it fixed if it can be, or replace it if can’t.”

Realizing an opportunity to be of help, Jackson and Jones began to keep common parts in stock and save old Chromebooks to use for parts. And because of Jones, who’s logged countless hours working on Chromebooks, Marietta is able to provide Chromebook repair service where many districts simply require that the parent replace the device.

“About 80 percent of what Josh does is Chromebook repair,” Jackson stated. “That’s his baby, and he’s good at taking care of it. He’s responsible for a lot more of the student systems than I am, and he saves parents a lot of money.”

Jones is the first contact for students who have issues with their Chromebooks. He’s a favorite with students, and particularly with the parents whose money he saves.

A Chromebook costs roughly $300 to replace, but it’s a rare occurrence that Jones can’t fix one for a whole lot less. Commonly, students do things like close a pencil in the Chromebook, springing the hinge, or something happens with a keyboard, and for problems like that, Jones is able to get a repair done quickly and cost-effectively.

“It’s cool when a kid comes in and they think they’re in trouble and it’s going to cost a lot to fix their Chromebook and Josh tells them it’s going to be $30 rather than $300,” Jackson explained. “Because of his ability, we get to save the parents in our district thousands of dollars every year.”

Jones began working fulltime in the district years ago. He’d been a teacher’s aide, but then he began to help Jackson, and his position has grown from there.

“Josh is an asset to the district and an important part of the technology department,” stated Jackson.

Jones spends much of the school day replacing screens and keyboards and fixing broken hinges and bezels, sometimes something even more serious, but it’s a service he’s happy to provide.

Both Jackson and Jones are proud of the fact that while many districts require that parents replace a damaged device, Marietta Public Schools allows its technology department to attempt to fix them at cost, keeping the fleet of Chromebooks working throughout their life expectancy.

“While a Chromebook isn’t meant to last forever, you can get about two years out of one without much maintenance, but we try to get three or four years out of them,” Jackson said. “To get four years out of a device that travels between school and home with a kid, that’s an amazing return on investment for a district.”

So basically, the technology department at Marietta Public Schools is its very own refurbishing company. And that’s just the way they like it.

“I enjoy what I do at Marietta because I can have a positive impact in students’ lives,” said Jones. “Having the technology they need to succeed helps them achieve future success.”