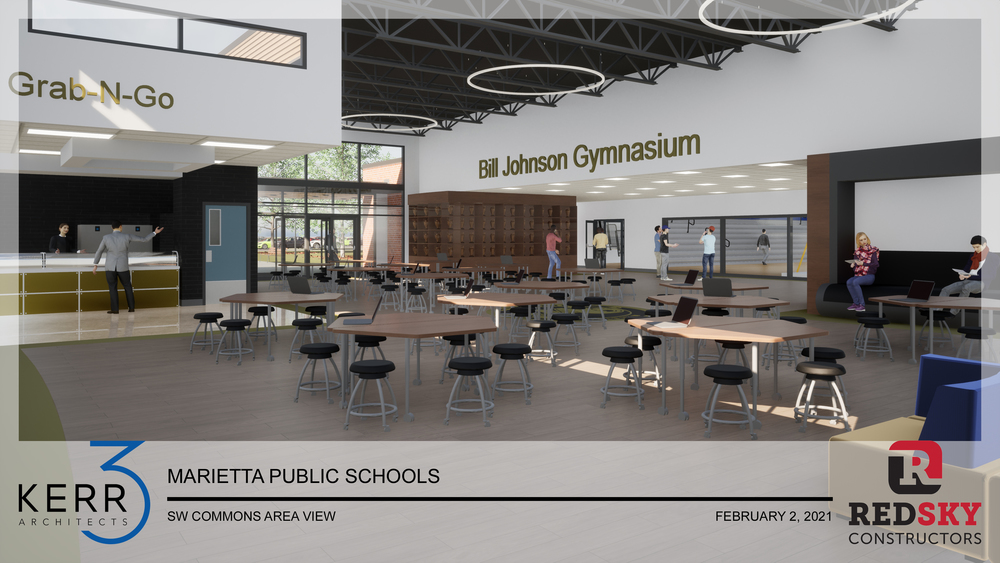 At Monday night’s board meeting, the Board of Education of Marietta Public Schools voted unanimously to approve the request of school administrators and the Marietta Alumni Association to honor the legacy of the late Bill Johnson by naming the school gym the Bill Johnson Gymnasium.

After being raised in the Thackerville area and attending school in the years before football was played there, Johnson transferred to Marietta during high school to play football. He made the transition easily and excelled on the football field.

According to Johnson’s wife, Sherry, he told people that Thackerville would always have a special place in his heart but insisted that he bled black and gold.

Upon his high school graduation in 1970 Johnson received an athletic scholarship to East Central University in Ada, where he competed for the Tigers as co-captain of the football team and earned his bachelor’s degree in education.

In August 1975, Johnson began his 45-year career with Marietta Public Schools. For 35 years, he coached basketball, track, and football. Johnson also served as a classroom teacher. Many Marietta graduates remember memorizing all 77 counties while in Coach Johnson’s Oklahoma history classes or successfully competing on one of many teams he coached.

Johnson passed away last June after a brief illness. During Johnson’s lengthy career in the school district he had an exponential positive influence on both students and student athletes.

One of those student athletes is Jeremy Higle, a 1991 graduate who played basketball for Johnson. Higle, who now has children of his own, said he will never forget the sound of Coach Johnson’s cowboy boots slapping on the wooden gym floor when someone on the team had done something incorrectly.

“Coach Johnson was one of the most caring, competitive and authentic people I’ve ever known,” said Higle.

Another of Johnson’s former players, Trey Westfall, graduated in 1993. He remembers Johnson as a player’s coach.

“Coach Johnson truly cared about us, about our lives,” he said. “He was a coach, but he was always a friend, too. I walked a little taller when he was around.”

Westfall remembers Johnson being invested in the lives of his players, even buying clothing and shoes for some of them.

“Just before he passed, I went to see him,” said Westfall. “I could tell he was in pain, but he was still Coach, still glad to see me, and still had a smile on his face.”

As far as Westfall, Higle, and countless others are concerned, naming the gymnasium after their Coach is a fitting tribute for his many contributions to the school system.

“It’s overwhelming. Bill would be over-the-top happy with this and there are no words to explain how our daughters and I feel,” said Sherry. “We know that he would love knowing that his name would be displayed in the place he loved so much.”

Sherry went on to say that she has letters that Bill saved from former players and students, describing his influence on them and how much they miss him, and explaining that Bill was the dad they never had.

“Coach Johnson left an amazing legacy in Marietta Public Schools and in the Love County community,” said Marietta Superintendent Brandi Naylor. “For someone to teach for 45 years – and all in the same district – is unheard of in today’s world, and we were blessed to have him.”

The district and alumni association has planned a ceremony to honor Johnson and his family. However, since strict COVID protocols during basketball season have restricted crowd size, organizers have chosen to wait until protocols have been lifted to hold the official ceremony, allowing more of Johnson’s family and former students to attend.