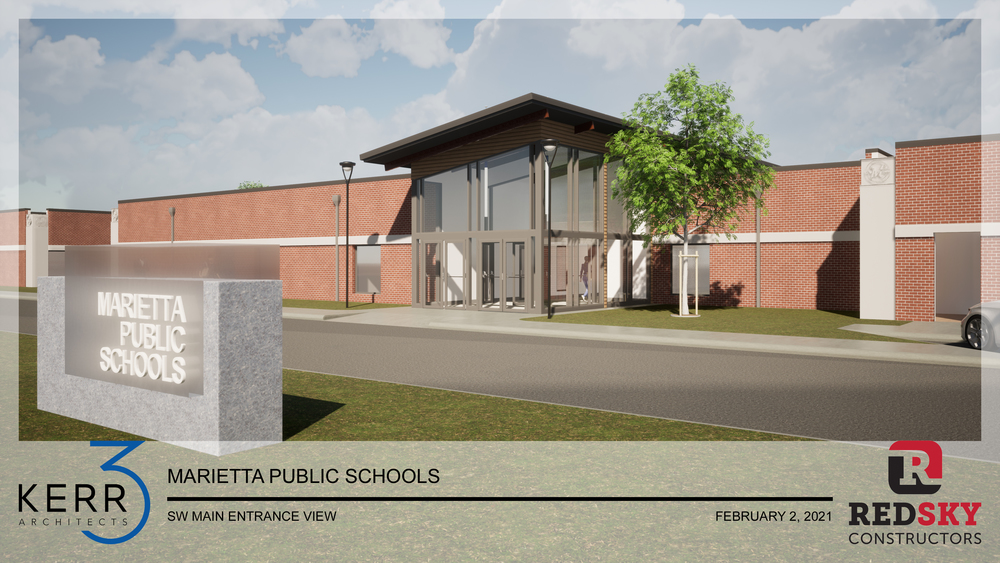 On March 2, voters in the Marietta school district will be asked to approve a bond for a new junior high/high school combination building with an estimated project completion of early to mid-2023. The new construction would ease overcrowding throughout the district by housing students from seventh through twelfth grades, supplanting the current high school building which was erected in 1970.

“Our enrollment has been steadily growing for several years,” said Superintendent Brandi Naylor. “We currently have several grades in our system with over 90 students and based on recent growth, will likely add 150 to 200 students over the next seven years.”

Although the current building has served the district well, it has begun to experience issues with plumbing, electricity, and flooding. In addition to being too small for present class sizes, the classrooms do not support current technology.

“There is limited charging capability in the classrooms for one-to-one devices and many rooms have only one working electrical outlet,” Naylor said. “We have the technology to help prepare our kids for the world, but don’t have the infrastructure to support it.”

Across the district there are no empty classrooms or offices. The new facility would alleviate overcrowding campus wide by allowing seventh and eighth grade junior high classes to be shifted out of the middle school building, thus freeing space for upper elementary classes to be moved into the middle school with sixth grade classes.

Additionally, the new facility would create parking for the auditorium when the old high school building could be razed after completion of the new complex.

The planned structure, which would be constructed directly to the west of the gymnasium, is planned to contain roughly 56,895 square feet, including approximately 28 classrooms and five science/STEM labs, an increase of about 16 classrooms and three science labs over the district’s current setup. Each new classroom will be 50-100 square feet larger than those now in use.

It will also contain a library, a warming kitchen for food service, an outdoor courtyard and two separate indoor commons areas, the largest of which will incorporate the remodeled lobby of the current gymnasium.

Additionally, the facility will house enough safe-room space to shelter all junior high and high school students separately in case of severe weather.

The cost of the construction, fees and financing charges will be $18,990,000, and would be the largest project that the district has ever undertaken.

The bond will be paid off over a 17-year period with an 8.5 percent tax increase. The increase per $1,000 in property tax would be $85 annually.

“As long as the district’s assessed valuation continues to grow as it has,” said Naylor, “there will be room in our bonding capacity to pass additional smaller bonds with little or no tax increase during the 17-year period for future needs the district may have.”

Amanda Faulkenberry, a 19-year veteran of the high school staff began teaching FCCLA at Marietta in 2002. In 2005, she married Bobby Faulkenberry, a 1994 Marietta graduate. The Faulkenberry’s are parents to two Marietta students: Emily, an eighth grader and Bella, a second grader. They’re also property owners in the district.

“We’ve outgrown this building in more ways than one,” said Mrs. Faulkenberry. “Our classrooms are crowded, and our numbers keep growing, and even though our IT and maintenance people do the best they can, wiring to support any modern technology is outdated. A new junior high and high school facility would mean better opportunities for our kids. They deserve this, and their future is worth it.”