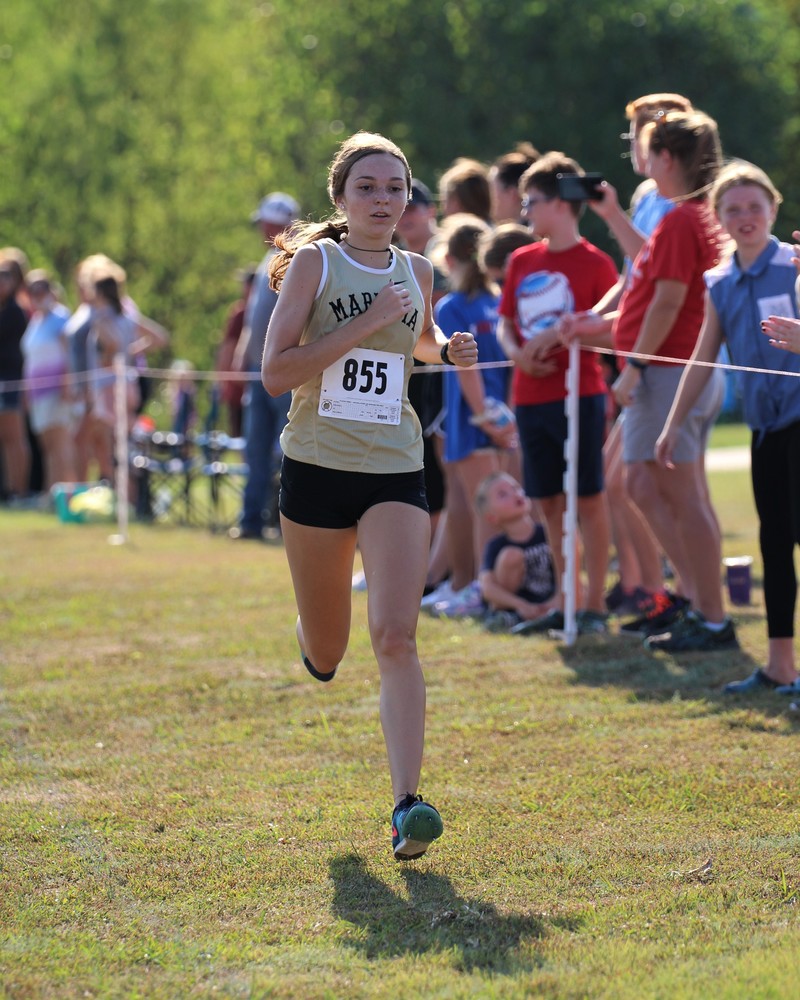 Marietta cross country season off to a running start

After several successful, often state championship-winning seasons, this year Marietta welcomed a new cross country coach, Ron Love. The good news: Coach Love is no stranger to winning. As a matter of fact, he’s won a ton of state championships in schools scattered all over the state. Six in Sallisaw, seven in Marlow, three in Dickson, nine in Madill, and two in Plainview, to be exact. So rest easy, fans of Indian cross country – we’re in good hands.

The Indian teams are coming off of a successful season, with the girls winning their second title in a row and the boys finishing third after losing a big chunk of their championship team from the year before.

The girls team is stacked with experience. Seniors Madison Lemons, Sophie Love and Jayleigh Blevins have proven themselves to be workhorses and leaders, along with juniors Vanessa Rodriguez and Rosie Castellanos. Even sophomore Tanasia Randle knows what it takes to get to the top of the podium. The Lady Indians’ team only has one freshman runner, Yadira Sanchez.

“These girls came back this year and the team hasn’t lost a step,” said Love. “They’ve looked good at both practice meets with Tanasia and Madison finishing first and third.”

The Lady Indians’ nemesis from last year, Plainview, has moved up in class to 4A, but Regent Preparatory Academy, a private school in Tulsa, is a powerhouse in 3A, likely to be the girls’ chief competition this season. Currently, Marietta girls are ranked number one with Regent Prep number two.

“The boys are young and we’re trying to build a team,” said Love, “but they’re solid up front with sophomore Wyatt Vinson and senior Wilbert Salas. Kyler Williams [junior] was running well, but he’s had an injury that’s going to hurt us.”

Coach Love also mentioned Preston Eastman, a sophomore, and freshmen Will Laws, Jackson Yearby, and Austen McQueen and the depth they’re bringing to the team, along with Cashe Waterhouse, a junior, who Love says isn’t where he needs to be yet, but will get there.

“The experienced boys have been carrying a good load,” Love remarked. “They’re consistent every day. The younger guys don’t have that consistency yet. It’s a tough, mental thing for them to learn to push themselves when they’re tired or just don’t feel like it. When they get some experience, I feel like the consistency will come.

Love knew that coming in behind former Coach Matt Appelman wouldn’t be a cakewalk.

“I’m hoping to keep these kids at a high level, but it’s hard to come in as a new coach and have kids trust you,” Love explained. “I don’t do everything like Appelman did. Every coach has their own system. If your kids buy in and trust you, things go well.”

After two practice meets, Love is beginning to see that buy-in and the development of trust.

“I think they’re starting to realize that I’m sincere about coming in and helping them get better, they’re getting it,” he said. “As the season progresses, they’re going to have to keep working hard and bringing times down.”

Running without Randle, Marietta girls came in third place behind Plainview and Byng. Senior Madison Lemons won the meet in 13:03. Vanessa Rodriguez finished in 7th place, turning in a time of 13:55. Next was Jayleigh Blevins in 19th place with a time of 14:39. In 33rd place was Isabella Salas Garcia with 15:30. Rosie Castellanos turned in a 15:44, good enough for 35th place, and freshman Yadira Sanchez finished in 41st with a time of 16:05.