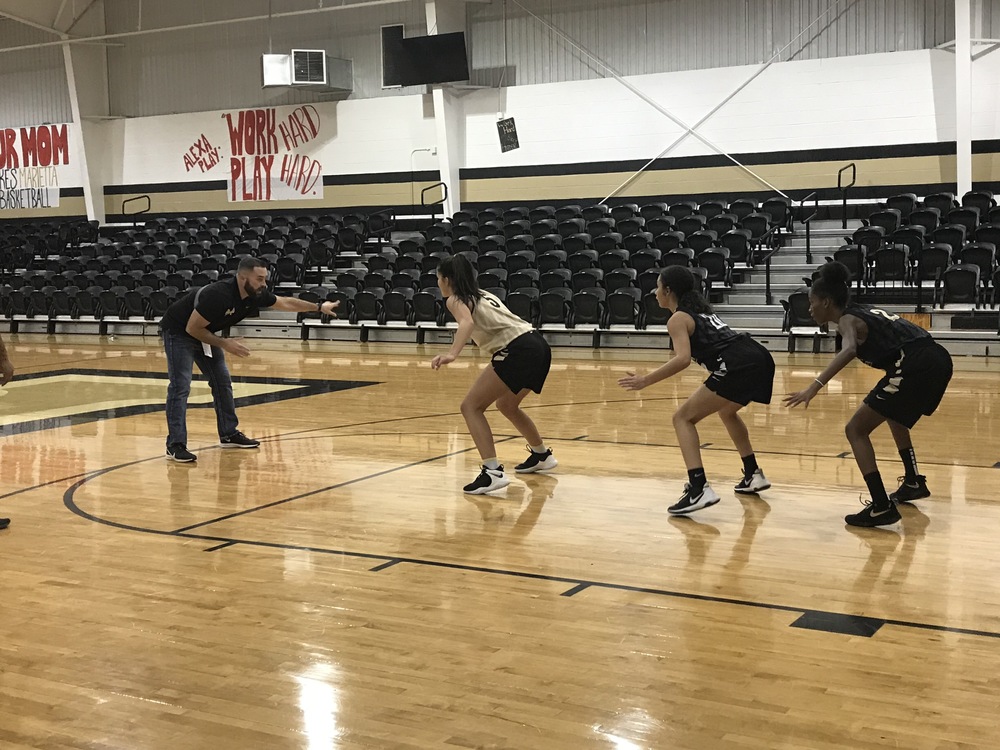 The 2018-19 season was a good one for head coach Jared Messer’s Marietta Indians, who finished 22-7, were district champs, and made a deep run into the playoffs. But the new school year brings a new season.

“We graduated eight seniors last year, so we’ve got a lot of new faces,” said Messer. “Our only returning starter is Garrett Morgan.”

After waiting for football season to end, Coach Messer and Assistant Coach Jordan Robinson had their first practice with the complete team on Monday, November 11. They’ve got almost 30 kids out, and the energy is high.

“This year we will be depending on Garrett [Morgan], and we’re going to be depending on the leadership of seniors like Oliver Serrano and Sethan Reed,” Messer remarked. “We’re also going to need some of our younger guards to really step up.”

“I’m excited to have so many,” said Messer, “and I think that there are several of those guys who could really help us – just have to wait and see who moves to the top of the list.”

“We expect to be good this year,” Messer predicted, “we won’t be satisfied with less than a winning season.”

For head coach Josh Drinning’s Lady Indians, the season promises to be an improvement from last year.

Last year, Drinning had no juniors or seniors on his squad and started four freshmen. This year, those young ladies are a year older, have a year of experience under their belts, and they know what to expect when they hit the court.

“I’ve convinced these girls that I’m here to stay, here to build a program,” said Drinning, “and they know that I expect to see a lot of improvement from them this year.”

Drinning is enthused about his team, and also about his new assistant coach. Tory Douglass is a hometown guy, well-known and well-liked.

For the 2019-20 season, Drinning and Douglass are expecting great things from their three captains, Toriauna Douglass, last season’s leading scorer who averaged 12 points per game as a freshman, Haven Matthews, who Drinning describes as a hard worker who does everything right, and Yaslin Sanchez, last year’s leading rebounder.

They’ll also be watching Kaylie Douglass who was one of the team’s workhorses last year in both scoring and rebounding, and they’ve got six freshmen who could come in and really make a contribution.

Last year’s 6-18 record, while nothing to write home about, also isn’t truly reflective of the season.

“We lost six games by one possession, so there were a lot of games that could’ve easily ended up as wins, including our district tournament,” said Drinning, “and we’re counting on the experience that our girls gained from last season to help us end up with a better record this year.”

The season opener for the Indians and Lady Indians will be on the road at Callisburg, Texas on Tuesday, December 3.