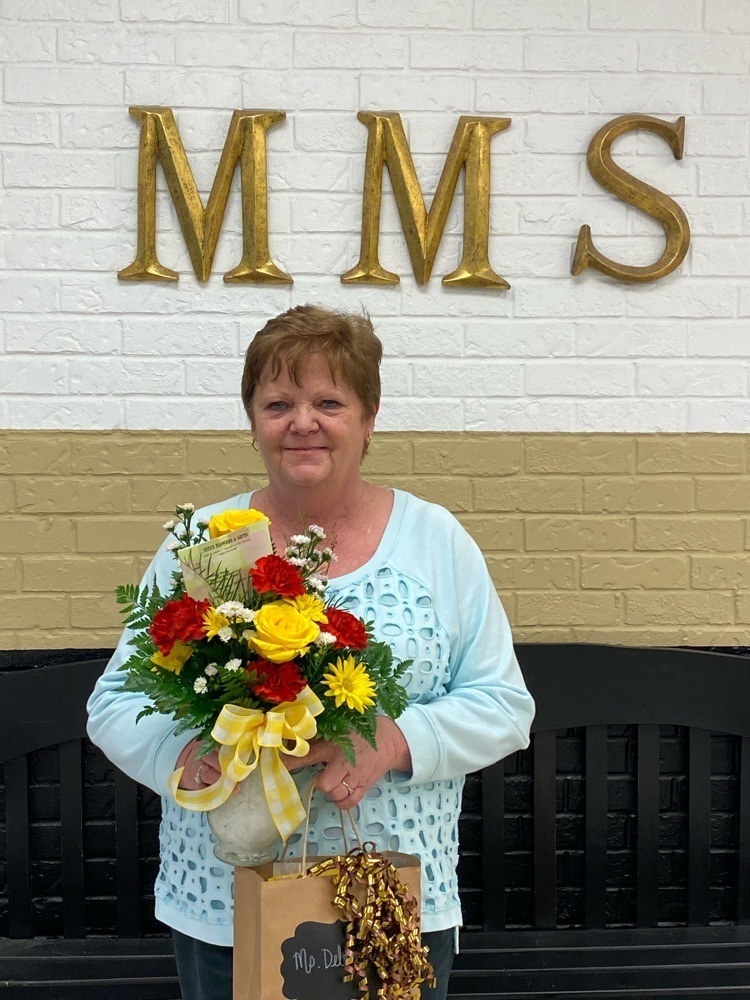 Debbie Davis, Marietta Public Schools’ Support Staff Employee of the Year for 2021, has announced her retirement after 35 years of service in the district.

Davis, who graduated from high school in Shawnee and lived there before moving to town in 1984, began working for Marietta in 1986 after she was hired by Homer Koch, the maintenance staff supervisor. She was 28 years old.

For 11 years, Davis worked as a custodian. During those years, she cleaned in the elementary school, cafeteria, auditorium, gymnasium, vocational agriculture building, high school, and middle school.

As a frame of reference, when Davis began her tenure with the school, she was cleaning in the old elementary pod buildings and the old cafeteria. Those buildings have long since been torn down to make way for replacements.

“Finally they moved me to the middle school, and that was my spot,” said Davis. “I loved it there, and that’s where I stayed.”

“When Carolyn was about to leave, she told me that I should apply for the library assistant’s position,” Davis explained. “I told her I didn’t have much faith in my ability to do the job, but she assured me that I could do it.”

Flanagan dragged Davis into Principal Jeff Dooley’s office where the duo spoke to him about the possibility of Davis moving into the position.

“Mr. Dooley told me he would have to advertise the job, and he did,” Davis continued, “but I applied for it, and he hired me. I’ll always be grateful to him for giving me a chance.”

That was 24 years ago. Now, for over two generations, Mrs. Davis has been a fixture in the middle school. A friendly face and a listening ear for all those who visit their library, and not always just to check out a book.

“I love those kids, and for a lot of reasons. They’re still young enough that they want my attention and I love to give it to them, and they still feel like I’m a little bit smarter than they are,” Davis said. “I look forward to seeing them and spending time with them.”

Anyone who’s ever worked with Davis knows that working in the library is what she was meant to do.

“Debbie Davis is a true gem and a tremendous asset to Marietta Public Schools,” said Middle School Principal Carrie Tucker. “She is always willing to do anything for anyone at any time. She is loved by all and will be deeply missed.”

Tucker isn’t the only one who’s going to miss Davis, either. There’s a list of folks.

“I’ve never worked with a person who is more dedicated to their job, more kind, dependable, and helpful,” remarked Librarian Robin Mayes. “The kids love her, the parents love her, the teachers love her, and I love her. A lot of us have tried to talk her out of retiring. I don’t know what we’re going to do without her.”

One of many really great things about Mrs. Davis is that the sentiment goes both ways.

“I wish everybody could enjoy their job as much as I have over the years,” she said. “I love all the people I’ve worked with. There have been many, and I’ve had a good rapport with all of them.”

During the past 35 years, Davis has worked for superintendents Joe Banks through Brandi Naylor, as well as a double handful of principals. And she’s worked with more teachers and support staff than you can shake a stick at.

When it comes to what she’ll miss when she’s gone, her school family is a huge part of it.

“This school has been a Godsend to me,” she said. “While I’ve worked here, I’ve lost my dad, my mom, my husband, and my son -- and I’ve been through cancer treatment. These people have been right there with me all the time. They’re like my family, and I wouldn’t have ever gotten through all of that without them.”

But it’s time. Time for some travel with her long-time best friend Linda Nelson. Time to be with family more, and maybe work on her house a little. Time to be lazy for a change.

“I’ve been here long enough that sometimes kids will come in and I can look at them and tell who their parents are,” laughed Davis. “I’ve had so much fun for the past 35 years, but it’s time for me to move on and let somebody else have a turn.”

Davis’s retirement will be effective in May.