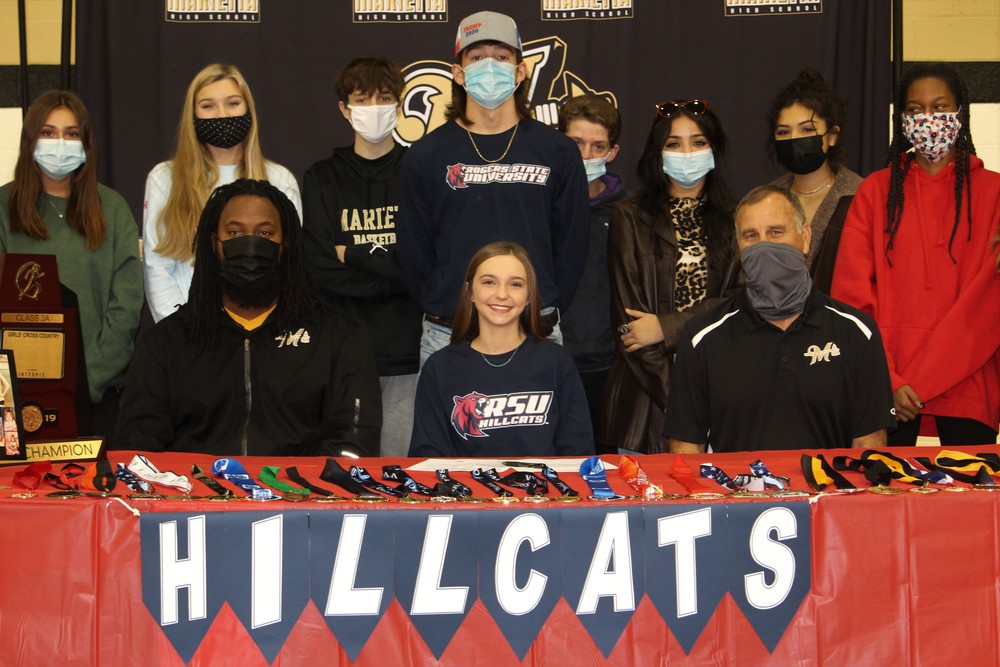 Friday, December 4 marked an important day in the life of Marietta senior Madison Lemons: she signed a letter of intent to run cross country at Rogers State University in Claremore.

Lemons, a member of the Indians’ 2019 state championship team and this year’s third place team, placed sixth individually at the recent state meet. She looks forward to joining the team which is coached by Matt Kennedy.

“I really like the coach,” said Lemons. “He’s organized and seems really interested in the health and well-being of the team, and all the team members were great.”

Lemons also expressed her enjoyment of the campus and the town of Claremore, which she said is just the right distance away from home, far enough, but not too far.

Lemons, the daughter of Jim and Mary Lemons and the granddaughter of Buddy and Eyvonna Lemons and Earl and Judy McDonald, said there are mixed feelings within her family about her moving away for college.

“My dad is very excited that I’m getting to compete in college,” she said, “but I think my mom is a little nervous about me going so far away.”

Mixed feelings aside, Lemons is thankful for her family.

“My parents were at every single one of my meets,” she said. “There are a lot of kids who don’t have that kind of support system, and I’m appreciative of mine.”

Lemons, who didn’t start running cross country until her sophomore year, said she looks forward to competing in college,

“My favorite thing about cross country is that it’s an individual sport, but a team sport at the same time,” explained Lemons. “You’re dependent on yourself but you try to do your best so it helps out the team, too.”

Lemons said she will miss high school cross country, particularly running with her friends and the encouragement of her coaches.

“I’ve had some great coaches – Coach Appelman, Coach Love, and Coach Benson – and I’m very grateful for their help,” she said.

Lemons will graduate at the top of her class of 2021, and even though she hasn’t selected a major just yet, she’s ready to head off to college at Rogers and run for the Lady Hillcats. (Photo by Charles Brown)