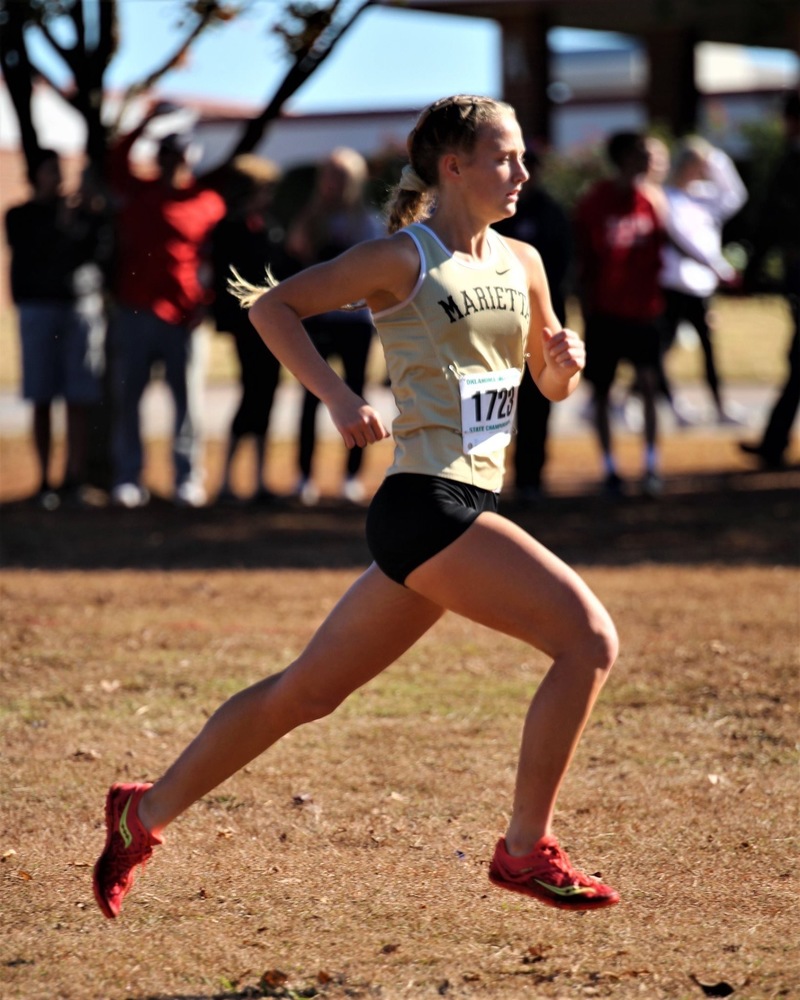 Marietta High School’s Mandy Sykora was named the KXII/Texoma Chevy Dealer’s A+ Athlete of the Year on air during the station’s 10 o’clock news broadcast on Friday night, May 15.

Throughout the school year, 22 student-athletes,  nominated by coaches and/or teachers, were honored as A+ Athletes, each one receiving a visit from Channel 12 sports anchor David Reed and recognition during a segment on the news. As the students are named A+ Athletes, they receive a $1,000 scholarship.

The program culminates in a presentation of the A+ Athlete of the Year with the winner receiving an additional $1,000 scholarship.

As Friday night’s presentation began, Reed asked viewers, “What makes an A+ Athlete? Is it dedication, hard-work, skill, endurance, effort, character, integrity, discipline, productivity, or desire? It’s all of those things.”

He then announced that Sykora had been named as the Athlete of the Year along with Durant High School’s Cooper McCoy.

Sykora’s resume as a scholar-athlete at Marietta High School is long and golden. Reed actually described it perfectly in the intro. Not only is she a co-valedictorian of her senior class, she helped her team to three cross country state championships while winning one individual title and one runner-up.

And who knows what she could’ve done at this year’s state track meet, when many feel that the MHS girls’ team stood a great chance to win it all – if it hadn’t been cancelled because of COVID-19.

Interestingly enough, Sykora, who knew she was in the running for the title, didn’t even have the television on.

“I wasn’t watching when it was announced – I forgot all about it,” she said with a laugh. “I was hanging out with a few friends watching a movie when Jennifer Hicks texted me to tell me congratulations. We had to DVR the midnight broadcast so we could watch it.

Sykora said the scholarship money will go into her bursar’s account at Arkansas Tech University in Russellville, Arkansas where she has received a cross country/track and field scholarship to begin in the fall semester.