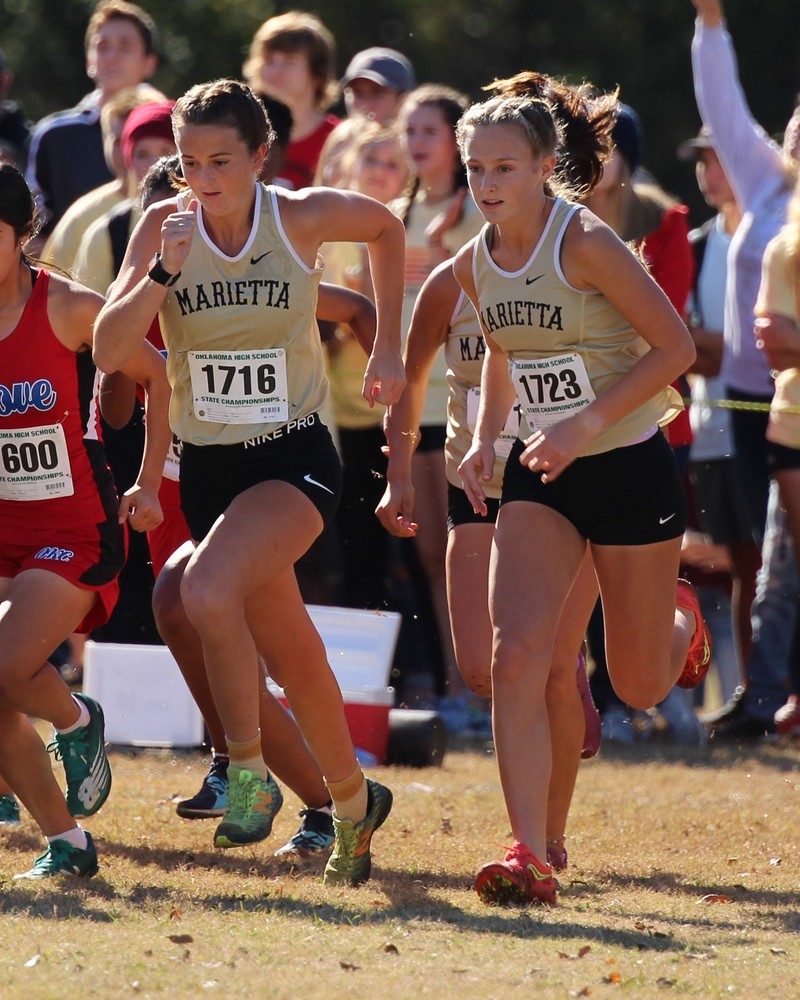 For Coach Matt Appelman and his Marietta Indian Cross Country teams, things went just like they were supposed to at the 3A OSSAA State Championship on Saturday, October 26.

For the Indians, this cross country season was expected to be a rebuilding year, after having lost a chunk of last year’s state championship team.

But after some promising finishes at early races, this little-engine-that-could team developed an “I think we can” attitude about becoming a podium team at state. And so on Saturday, they chug-a-chugged their way to a third place finish. According to Appelman, the boys ran an unbelievable race.

Colt Bartling, back for the state competition after over a month of being out with an injury, hadn’t run a full 5K race in many weeks, yet he gave his team all he could give them.

“In all of my career, I’ve never seen a kid run with more heart than Colt did on Saturday,” Appelman remarked. “He ran a gutsy race, and I’m so proud of him, of all of the boys.” Bartling finished the race in 65th place with a time of 19:40.49.

The highest finisher for the Indians was Wyatt Vinson, who, with a time of 17:27.14, came in fifth place.

“Wyatt ran a great race,” said Appelman. “Watching him run, it’s easy to forget he’s just a freshman. He should just continue to get stronger and better. By his senior year, who knows what he’ll be capable of.”

Vinson said the season was definitely one to build on.

“We finished the season running our best races,” he said, “and I think we will continue to get better. I’m excited to see what we will do next year.”

The Indians’ sixth and seventh runners were Cash Waterhouse and Sergio Gomez, with times of 20:30.69 and 20:52.80, respectively.

The Indians’ third place finish was a more-than-respectable one, behind first place Kiefer with 63 points and second place Oklahoma Christian with 99 points. The Indians amassed only 117 points, way ahead of the fourth and fifth place schools Chisholm and Regent Prep, both in the 140’s.

Although the Indians lose Danny Sanchez and Colt Bartling, the future looks bright.

“The team has runners who will continue to get stronger,” Appelman said, “and next year, Jackson Yearby and Will Law, two solid guys, will be coming up from middle school so the boys should be good next year.”

As for the Lady Indians, Saturday meant the addition of yet another state title to their quiver, the third in four years, and the team’s fifth in the last six years.

On October 19, the Lady Indians won the regional meet by the barest of margins against longtime foe, the Plainview Lady Indians. With the score tied, the decider was the sixth runner, and Maretta’s Sophie Love edged out Plainview’s sixth runner by just a few seconds.

On Saturday at State, the Marietta ladies won again, but this time with quite a bit of breathing room.

The Lady Indians finished with 62 points and four of their top five runners in the top 20, a feat that none of  their  competitors could come close to matching. Plainview’s team total was 80 points, good enough for second place.

The team’s two senior members have led their little pack all year, and Saturday was no exception. Kaelyn Dobbins ran fourth in 12:38.90. Mandy Sykora finished the race in sixth place with a time of 12:40.65.

“This championship really was a team effort, it took everybody,” Appelman stated.

“When you look at their season, it’s amazing what they’ve done,” he continued. “They went undefeated, and with some of the teams we ran against, that’s huge. I’m just really proud of this group.”

Dobbins agrees with her coach.

“We beat highly ranked teams all throughout the season and finished undefeated, so even before we went to state, our season was a success,” she said. “Winning state was just the icing on the cake.”

The Lady Indians will graduate Sykora and Dobbins, who they’ll no doubt miss, but they’ll still have a solid core in Randle, Lemons, Love, Rodriguez, and Alvarez, so there’s no reason for the legacy to end.

“Next year the girls will have some big shoes to fill,” Appelman continued, “but they’ve got the talent and dedication to fill them. They really should be back up on that podium again next year.”

Cross country is a sport that’s all about commitment and hard work.

“In June, we set a goal to be undefeated and win the state championship, and then we worked hard to achieve it,” said Sykora.

Marietta cross country’s culture of high expectations should continue to satisfy fans for years to come.

It’s a good time to be an Indian.