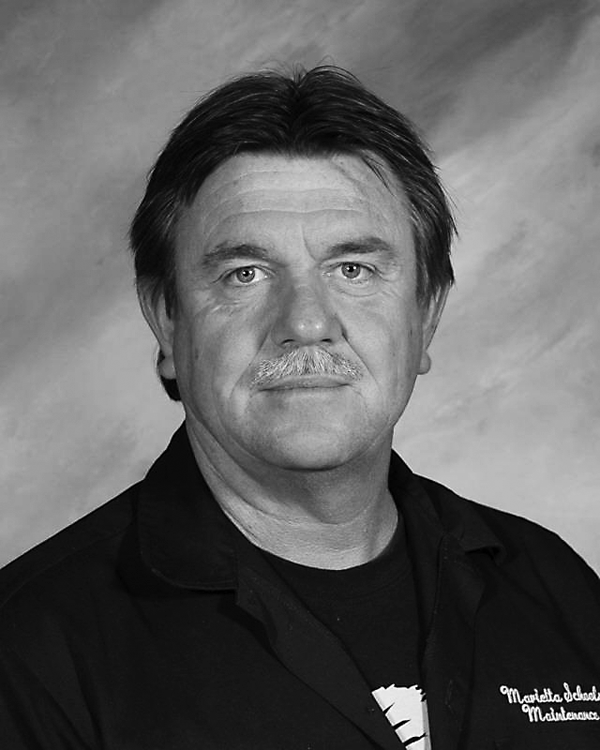 If you’re on the campus at Marietta Public Schools and you look up, up in the sky, you won’t see a guy flying around in a blue leotard and a red cape.

But you might see a guy in a work shirt and jeans on top of a building, fixing an air conditioner.

If that happens, that guy won’t be Clark Kent, it’ll be Jeral Berry.

As far as the rest of the world is concerned, he might not be able to leap tall buildings in a single bound, but just try convincing the administrators, faculty and staff at Marietta that he’s not Superman. Go ahead, I dare you.

For ten years, Jeral Berry has been keeping the wheels on the bus at Marietta, both figuratively and literally.

As the schools’ Maintenance and Transportation Director, there’s no doubt that he needs to be a jack-of-all-trades, and make no mistake – he is.

Berry is one of those uber-talented individuals who can fix anything. Broken-down buses, persnickety plumbing, erratic electric circuits, chaotic construction projects, riotous roof leaks, hellish HVAC units and tempestuous thermostats. You name it, and I promise, he’s already repaired it a half-dozen times, at least.

Every time a teacher hollers for help, he goes running.

He installed a weather station on the roof of the Middle School.

He maps out the district’s many bus routes at least once a year, more than that if there’s a move-in that necessitates it.

At all hours of the day and night, he’s on call just in case anything on campus needs his special attention.

He’s the weather watcher who opens up the school’s safe room to be used as a tornado shelter, no matter what time of the day or night it’s needed.

He often drives through the campus on nights and weekends to make sure everything is safe and sound as it should be.

And did I mention that he serves as a substitute bus driver when one of the regulars is missing? It takes a special kind of hero to do that.

In a time when schools are pinching their pennies until Abe Lincoln squeals, Berry has been a godsend for the district.

“We are blessed beyond belief to have Jeral Berry on our staff,” said Superintendent Brandi Naylor. “He is an irreplaceable part of our school system.”

Berry’s job tasks him with all things transportation, including managing bus routes, recruiting drivers, and maintenance of the schools’ fleet of buses and other vehicles. He also acts as supervisor for the maintenance and custodial staffs. And he manages repair, renovation, and construction projects, including part of the schools’ recent bond project.

“He has overseen the removal of the old aluminum bleachers as well as getting them repurposed, both in design and labor,” said Naylor.

But where Berry is concerned, there’s a huge gap between what his job requires and what he actually does. He’s one of those rare people who just does what needs to be done, whether it’s really his job or not. And he’s one of the nicest guys you’ve ever been around in your life.

“Honestly, I don’t know that the district could operate without Jeral,” said Cynthia O’Connor, Executive Assistant to the Superintendent. “I’ve never known anyone who is as dedicated to his job or enjoyable to work with.

“Jeral looks for ways to make our jobs easier and he’s always available if he’s needed.”

In a day and time when most people are more worried about looking out for themselves, there are still people who put the needs of others first. Jeral Berry is one of those people.

“He’s humble, and never wants to take any credit for the things he’s done,” said Naylor, “but Marietta Public Schools just could not make it without him.”

So, no, he’s not a bird or a plane. He’s not really Superman. But he’s the closest thing Marietta Public Schools has and they wouldn’t trade him for the real thing.